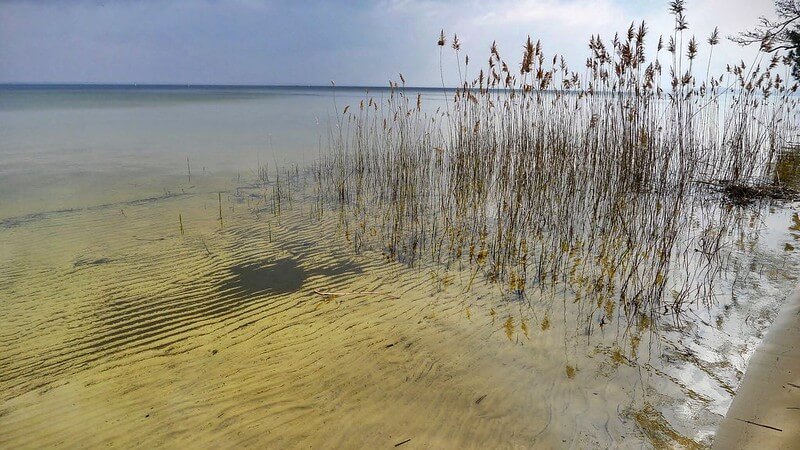 Only 10 km south of the Bassin d’Arcachon, to which it is connected by a canal, the lake of Cazaux is the second largest freshwater lake in France. Nestled in the heart of the forest and protected from the wind, it is home to an exuberant and generous nature on nearly 5,500 hectares, enough to satisfy all dreams of exoticism.

Very appreciated for its fine sandy beaches, its numerous wild creeks, its pure and calm waters, this lake is a real paradise for family swimming. Parents will find it a safe place for their children to swim, as it is possible to walk several hundred meters in some places.

The practice of sailing is also done there in all serenity and the fishermen plebiscite this place for its enchanting framework; they find pikes, pike-perches, perches, carps, etc. either in its channel, or in certain creeks where these fish like to spawn in the reeds with the not very deep water

The lake of Cazaux was formed by the accumulation of water coming from a deep source of the central massif which feeds the lake permanently.

An ancient Gallo-Roman village was established there before disappearing under the waters. Several sites dating from the Iron Age have been found in the old bed of the Gourgue, a small stream south of the lake.

Two main beaches are supervised from mid-June to mid-September with lifeguards and a first aid station. The other beaches, even those without surveillance, have large, shallow areas that are reassuring for families.

The GR 8 also runs along part of the northern shore and the entire western shore of the lake, separated from the Atlantic Ocean by only a few hundred meters.

Those who like long vacations and short stays without too much travel will find in the village of Cazaux all the charms of a small, well-equipped and relaxing seaside resort.
Tourist Office of La Teste-de-Buch – +33 5 56 54 63 14 – www.tourisme-latestedebuch.fr

Led by the team of the Arcachon Diving School, this center has received the label “Point Fort Animation Plongée”.
+33 5 56 22 99 48 – vsmplonge@wanadoo.fr